One hundred patients were enrolled in this study. After induction of general anesthesia, videolaryngoscopy was followed by jaw thrust and cricoid pressure maneuvers performed in random order. Laryngeal anatomy was recorded continuously and was saved as digital images following the initial laryngoscopy and after each maneuver. Glottis grade [modified Cormack and Lehane (C&L)] was recorded, as was the total glottic area.

The jaw thrust maneuver was superior to videolaryngoscopy alone in improving the modified C&L grade and the visualized glottic area; however, no significant improvement was noted with cricoid pressure. We therefore recommend the use of jaw thrust as a first-line maneuver to aid in glottic visualization and tracheal intubation during GlideScope videolaryngoscopy.

Improving the C-MAC video laryngoscopic view when applying cricoid pressure by allowing access of assistant to the video screen.

Minh’s clinical pearl : If you are having difficulty in intubation/laryngeal view, with DL, VL or SGA placement or blind intubation via an iLMA of whatever type. Get trusted assistant to apply a decent jaw thrust.

It will improve whatever airway technique you are trying! 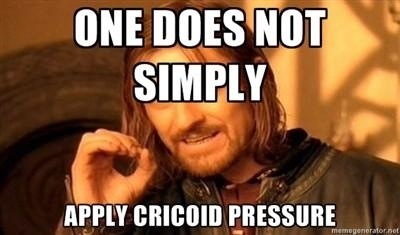 One thought on “Will video resurrect the cricoid pressure star?”