Twitter was alight with tweets about this study this morning. It was published in October but somehow I missed it. No worries as Twitter eventually got onto it , so thanks Pierre!

Its a well performed review and nicely written article. Its conclusion comes as no surprise though. Basically, if you dont have a lot of experience using intubation and ventilation for head injured patients, then there is an ASSOCIATION of worsened mortality.

Interestingly but not surprisingly if you do have lots of experience in intubation and ventilation, MORTALITY is no better , its JUST not worse! This just confirms what we all know : your chance of dying after TBI is determined by the initial injury. If you are going to live, you are going to live, mostly. What neurologic outcome you have though , probably is determined by secondary brain injury in the time after the initial insult. But this study reinforces the concept that you can make things worse, even to point of worsening mortality. What this study cant say is what the limited experience provider does that is associated with worse mortality. Is it failed intubations? Is it more hypoxic events during intubation? Is it more aspiration events? Is it poor ventilation post intubation? Is it delay to hospital care i.e neurosurgery, as a result of the prehospital intubation?

The level of experience of the prehospital provider was judged in all the pooled studies by 3 investigators analysing and reaching consensus to make 3 groups : LIMITED, EXTENDED EXPERIENCE and INDETERMINATE

Studies used in analysis included only one RCT(Australian!), the rest were observational cohort series. Some used Prehospital RSI for intubation, whilst others used cold intubation ( without any drugs). Majority of the studies analysed were from USA.

So its a mixed bag but to the investigators credit they chose a hard end point : MORTALITY. They didnt mess around with BSE stuff like first pass success ETI, overall intubation success etc.

Some folks have interpreted this study as saying prehospital intubation should not be performed by limited experience providers. Others go further and claim this should not be done at all by anyone as there is no proof it improves TBI outcomes. Certainly this study supports what is done by several prehospital systems throughout the world that offer a two tiered response to prehospital care of TBI patients. For example the Bernard RCT from Victoria, Australia, showed that a two tiered paramedic response ( standard and critical care paramedic levels), actually improved outcomes with prehospital RSI for TBI done by the critical care paramedics. This Victorian system trains their high level paramedics to perform prehospital RSI to an elite standard that often surpasses performance statistics of most Emergency departments in that state.

So if anything this study supports the arguement to have a two tiered prehospital system responding to head injured patients….but then there was the Sydney HIRT trial that didnt show any mortality difference between two levels of response(physician vs paramedic)! But even the HIRT trial was viewed with caution (read HERE)

So what can we conclude :

-If you are going to do prehospital intubation ( and thats a big IF) for TBI, you should have an elite level of training with ongoing elite testing of performance. What defines elite level? Better than everyone else who is doing it.

Good luck out there!

Dr JOHN HINDS – Our Friend and Hero in Prehospital Care 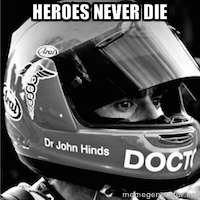